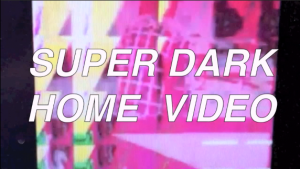 Been a minute since an update because we, Super Dark Collective, have been working on their first TV Show “Super Dark Home Video” for public access in Albany, NY and a private TV Station in Saratoga, NY.

We’re getting close to wrapping up the first season which will contain 6 half-hour episodes.
The episodes are basically years in the making, consisting of brand new videos as well as reused or recycled/ re-edited footage. The visuals consists of original music videos, short films, skits, ‘bumps,’ live performance, and loops, set to all original music from Super Dark Collective and friends.

SDHV will basically be a surreal and psychedelic experience rather than an standard program. Based around a loose and interpretive story line, SDHV will take the viewers for an adventure that for some is uncomfortable and to others feels like home.

Check out the Facebook page as we near it’s release and catch some small updates and things we’ll post as the show gets ready to air.

Photo by Shane Sanchez during the Bird Pervs video shoot