A legacy of broken skateboards… 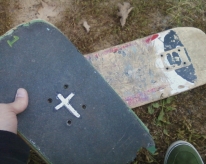 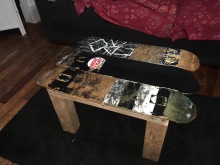 This is my nearly complete collection of broken skateboards over the years in order from the latest back to the first. Each one has a story and experience: my accomplisments, struggles, progression, and mistakes. I wish I had started this saga years ago and could remember more details of each board’s adventure. For the full story, I recommend starting at the beginning.
…………………………….

50. something Youth? – deck from a local skate shop outside of Denver, CO while I was on vaca in the summer of 2017.

49. Mini Logo – is it possible that I haven’t had to update this since the end of 2015!? I really don’t do this much these days I guess. But yeah, solid deck, made it last (unless i forgot about one in between which is very possible) but cracked it at some point and donated it to Sarah for a future painting project. Now finally skating my normal size 8 that i got a couple years ago at a local shop in Denver, Colorado when I was on vaca. (3/16/20)

48. “No-name deck”- According to my last post, I got this X-Mas 2013 and here I am adding it to the list nearly 2 years later. This seems to be the average lifespan these days. This one got too beat up to continue skating so since it’s intact I hope to find someone who will paint it/ make art with it. Hard to remember any significant moments but figure I must of retired it sometime this past summer. Currently riding another mini logo, but as winter is upon us it might be a while before i get back on it. (11/29/15)

47. Baker – Another great, long-lasting board. It’s hard to remember when I first got it, and first cracked it, but the second impact was from was a 6 stair at UVM in Burlington, VT when I got some skate time with Ryan during a nice weekend getaway in May. Some flat ground tricks when i was skating with Casey the other day in Congress Park rendered her virtually unskatable until I was forced to finished her off. Now finally skating my new no-name deck from Christmas 2013. I need another skate-cation. (5/31/14).

46. Mini Logo – Yes, another one of these things, I love em cheap. Busted this guy doing a boneless over the Log Gap in Saratoga (in the parking lot of the Putnam Den), a lame break considering I had just ollied it smoothly enough. O well, this board lasted me a crazy long time since i hardly skate these days, but hey, I still got it!

45. Mini Logo – Gary’s other gift. Sort of a short lived board. Cracked the tail pretty good doing varial flip down a little step in Lake George during an Americaid skate/ film session with Casey Schultz while he was visiting. Didn’t end up breaking it completely just got annoyed by the monster crack and set up another new mini logo. Figured this way I could donate the full deck to art or something.

44. Think – My friend, and super talented musician, Gary Ziroli gave me this deck, and another, as a gift since he had no use for them. It was a good board. I broke it doing a boardslide down the hubba at the skate park in Toga. Now onto the other deck he gave me.

43. Toy Machine – 1st was great so round two. This sucker lasted a while, eventaully cracked ever so slightly and lasted a little while longer still. I broke it in March 2012 at the Saratoga Skatepark doing an ollie up the pyramid to 50-50 on the hubba to ollie off… the land wasn’t too smooth… and the previous crack didn’t help.

42. Talent (leaving VT it would be the last deck I buy from there… for a while anyway…) The reason this board isn’t broken is becasue I wore it down so much it became terrible to ride, and I already had a backup. So I donated it to a friend to paint whole and set up my new Toy Machine.

41. Toy Machine – I bought this board at Maven in Burlington, VT on some holiday where most things were closed I think. I needed to skate so bad that day that I had to drop bones at Maven, an overpriced skate shop mostly concerned with swag I would say… but i’m glad I got this board becasue it was nothing short of awesome!

39. Talent (the local shop’s deck–cheap and decent) I think this is the one that only lasted a week though becasue I lost control down a hill and it ended up under a car tire…

38. Alien Workshop – Arto Sarri’s Owl deck. I had wllways heard great things about tese boards being sick and underated so I bought one at top dollar at Talent (the local shop in Burlington, VT). Wasn’t thrilled with it’s lifespam.

35. Speed Demon (another cheap one, was good)

29. Flip – bough it cheap of Ryan becasue he didn’t like/ want it, it was a little too thin for my/ our taste.

28. MiniLogo – this is my precursor to buying the cheap aka not big name brand decks… for the most aprt they were all great.

27. Darkstar (convinced I’m not into these boards)

26. Darkstar -“unbreakable.” This board was marketed as unbreakable or you get a free one… well busted this baby on Amers loading dock doing some flip trick grab probably and well it had like wire mesh netting in it so you couldnt actually break through ‘all’ layers, blah, blah, blah, I took it back and had to give it up (hence no photo) to claim a not totally truthful, but certainly deserved, free one.

24. Enjoi (I was always a big Rodney/ Daewon fan so why not steer away from all the Zeros and try different stuff, yay)

23. Element (the last one was awesome I decided to continue for a moment with this brand)

22. Element – limited edition CKY deck. For a while this Christmas gift was merely hanign on my wall in decoration/ admiration because it was limited and I was/ am such a huge CKY fan… buttt down the line I needed a deck and I felt it was time to put it to proper use and leave it unrecognizable.

15. Foundation – Leo Romero’s High Five deck (which I bought out of respect for the one he gave me a while before). I accomplised a couple ill things with this board.

14. Mystery – broke this while skating with my mom and brother at USM college in Gorham, ME. Ollieing off a ledge I think…

11. Zero – 10 Years of Thomas (I’ve allways been a big Jamie Thomas fan). I felt the board was too short lived though…

9. Foundation – the deck Leo Romero gave me which I unforuntately left at Zumies to get tossed out because I was excited for my new board… yes, another Zero, but looked similar to this one #37 except black and white.

8. scam – bought this deck at the Zumiez Couch Tour off some dudes with a van full selling decks at a discount, seemed sketchy yet allright until I set it up on the spot and the whole thing delaminated… sucked but got a good stroy out of it since Leo Romero (now world famous pro skater) gave me a Foundation deck of his after hearing my story.

7. Zero – broke it at the Zumiez Couch Tour skate demo held at the Crossgates Mall parking lot in Albany, NY. (doing some trcik over a sewer grate i think)

6. Zero – I remember shredding this one with super huge fro and breaking it while Nick was taking photos of me ollieing down a narrow 5 stair behind Boarders in Saratoga.

3. Zero (accidental duplicate from a CCS shipping problem) You can see all the blue marks on it from the coutless hours skating the West Side kiddie pool… ah, good times.

1. Zero – 3 Bloody Skull (my favorite from the Tony Hawk Video Game). My first skateboard. It will allways be very important to me. I became a skater on this deck, and that changed my life. The only board I’ve owned that lasted over a year–just look at that date!